India has emerged as the third largest startup ecosystem in the world, with 107 unicorns (startups with valuations of $1 billion or more) with a total valuation of $340.79 billion, as of 7 September 2022. The year 2021 witnessed a record set of 44 entries to the coveted unicorn club, even as many ‘soonicorns’ (soon to be unicorns) waited in line. The promising Indian startup ecosystem is, however, facing serious challenges attributable in part to current global macroeconomic conditions.

An indicator of this challenge is the steep decline in funding available for Indian startups in 2022. Funding data from Inc. 42 and Traxcn reveal that as opposed to $4.6 billion worth of funding received in January 2022, Indian startups seem to be facing an early winter, with only $885 million in funding received in August 2022. Similarly, looking at quarterly data, the quarterly funding of Indian startups peaked in the third quarter of 2021 at $14.8 billion, and has been steadily declining since then. The figures for startup funding in the first and second quarters of 2022 have been $10.3 billion and $6.84 billion respectively. What accounts for such volatility in funding and this decline in available funding? The reason for such a ‘funding winter’ is to be traced to global macroeconomic developments, especially changing interest rate regimes between 2020 and 2022. 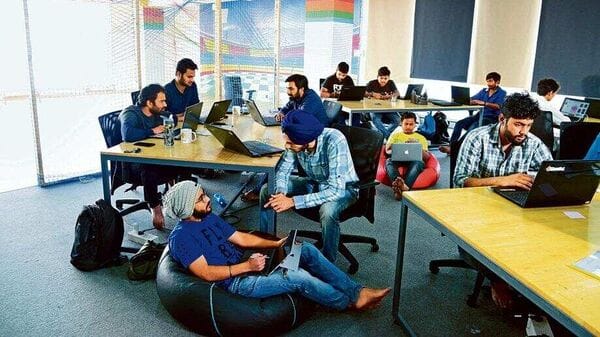 The result of this unprecedented accommodation and low interest rates was negative real interest rates in global bond markets. Investors, who sought real returns and growth, diverted their attention to holding public and private stocks, from the earlier bonds held. As a result, despite a severe contraction of global gross domestic product (GDP), share valuations rose the world over, including India. India received net equity portfolio flows of over $4.4 billion, even as debt portfolio flows fell to more than -$3.3 billion.

What do these macro developments mean for Indian startups? As interest rates rise, and with Present Value calculated by the formula [Present Value=Future Cash Flows/ (1+ interest Rate)^number of time periods], these hikes would lower the valuations of startups, even if they had no debt exposure and have used equity capital to finance their operations. Rupee depreciation too would impact both startups that are trying to raise funding in dollar terms and those which have already borrowed in dollars. In the case of the former, depreciation of the rupee affects their funding and also their valuations in the process. For those which have already taken dollar loans, their debts would become more expensive on account of rupee depreciation. Such startups may not be in a position to use the complex hedging strategies used by large corporates. The Indian currency’s depreciation is also likely to increase the operational costs of several startups, affecting their margins negatively.

This year’s change in the global macroeconomic scenario spells a change in the investment climate for Indian startups. The reversal of liquidity in the system and rupee depreciation will lead to venture capital investors prioritizing profitability and unit economics over growth. Companies whose valuations are lower and for which raising funds at lower valuations is less attractive will need to find sources other than equity funding. Cash preservation rather than cash burn may thus be the mantra to follow amid such financial uncertainty.

Decoding the Potential, Challenges and Opportunities for India’s MSME sector

How Social Commerce is Aiding the Growth of MSMEs?